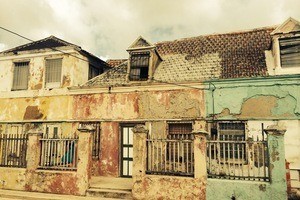 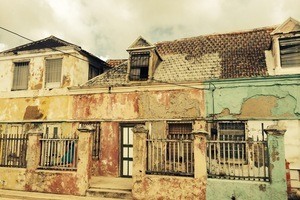 The island of Curaçao in the southern Caribbean sea was colonized by the Dutch West India Company in 1634. With no natural gold deposits, the small island had been passed over by other European naval powers, but the Dutch found it an ideal base for their burgeoning slave trade with Africa.

Building the capital city of Willemstad in the natural bay of St. Anna, the colony soon prospered. The Dutch lined the inner harbour with brightly painted buildings that mirrored the architecture of Amsterdam. Prior to the slave trade, the principal business of the Caribbean was piracy, so the Company ringed the city with forts. As the colony prospered and grew, the walled city could no longer contain enough housing, so a narrow strip of land bordering the sea was developed into a residential district. Named Pietermaai, the new neighborhood was set aside for the wealthier merchants, bankers and ships captains of the Dutch West India Company. Building colonial mansions along wide breezy boulevards, it was littered with theaters and fine restaurants.

After the Dutch abolished slavery in 1863 the colony’s fortunes began to fade until oil was discovered in 1914 and the Royal Dutch Shell company built a refinery. As the refinery, located on the northern side of the Willemstad harbour prospered, the exclusive Pietermaai district’s fortunes began to wane. By the end of the 20th century, with the merchants and bankers of the West India Company long since departed, the colonial mansions began to crumble and fall into neglect. The once fashionable neighbourhood steadily fell into ruin.

But within the last 10 years the Pietermaai has begun to show signs of revival. As tourism began to increase, many of the colorful mansions have been restored into boutique hotels, diving centers, and restaurants. But many of the buildings remain dilapidated, living side by side with the newer developments. A local initiative has seen many of the empty buildings been set aside as giant canvases for local artists. The crumbling plasterwork is now painted over with giant murals, many of which depict the slave trade which once characterized the colony.

A walk through the Pietermaai neighbourhood is filled with beautifully faded mansions, covered with wild tropical flowers, through which the original coral pinks and pastel blue plaster work can still be seen. Once home to the wealthy merchants and ship captains of a colonial trading company long since disappeared into history, today the boulevards are undergoing a steady and colorful renaissance.