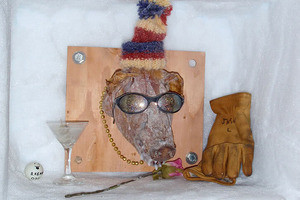 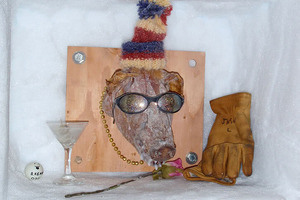 Deep below one of the world’s most remote outposts, a network of tunnels cut into the ice has come to house “shrines” dedicated to both the odd, and the profound.

Founded as a small research base at the South Pole in 1956, Amundsen-Scott Station has developed into a thriving research hub sometimes housing hundreds of science and support personnel at a time. What originally began as a cluster of wooden buildings has progressed into a state-of-the-art network of facilities designed to support scientific operations while mitigating the effects of the harsh Antarctic environment on its inhabitants.

What many do not know, however, is that beneath the expanse of high-tech buildings, communications facilities, and even an airport complete with an ice-runway, there lies a complex web of tunnels carved out of the ice itself. Completed in 2002, these tunnels were created to convey fresh water and effluent to and from the new “elevated station” buildings.

Since that time, adventurous station personnel have descended into the tunnels (the temperature of which hovers just below -60°F/-51°C) to create personal memorials to a wide array of Antarctic experiences. Some of these shrines commemorate specific Antarctic seasons or completed work projects, and some are are just silly.

One of the strangest of these monuments consists of the body of an atrophied White Sturgeon and a hand written account of its journey. The fish had arrived in 1992 at McMurdo Station (a US base located at the edge of Antarctica and the Ross Sea) and had been destined for a remote Russian station called Vostok. However, the Russians gifted the sturgeon to American scientists who later discarded it after it had languished, uneaten in a freezer for several months. It was from the trash dump that a garbage processing crew reclaimed the sturgeon, and it then made its way from location to location across Antarctica. It finally become enshrined in the tunnels beneath the South Pole where it greets visitors from a ledge chiseled in the ice.