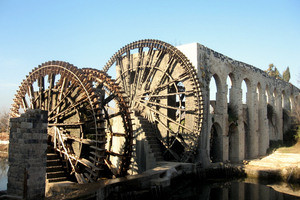 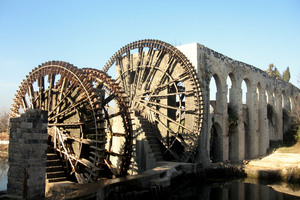 The Norias of the Syrian city of Hama are a collection of historic waterwheels so lovely and elaborate that they make classical Western waterwheels look weak in comparison. Unfortunately, after surviving for hundreds of years, these lovely wooden constructions are in danger of becoming victims of local conflicts.

Evidence of these ornate water wheels dates back as far as the 5th century CE, although none of the extant examples have been found to be quite so ancient. The norias (“wheels of pots” in Arabic) were originally constructed on the Orontes River to move H2O through a series of aqueducts that fed farms all across the settlement, becoming so iconic that they eventually became the symbol of the city. Even after they fell out of general use with the advent of modern irrigation systems, the norias were left intact, aging into beautiful historic icons of the city’s agrarian past.

By the modern day there were 17 of the historic wheels still standing across the city, some attached to old buildings, others just standing free as the city changed around them. The iconic relics were even to be considered protected UNESCO artifacts, but unfortunately this designation has yet to be approved. Sadly, it may be too late in any event. Recent reports from the war-torn region suggest that some, if not all of the norias may have been burnt down. For history’s sake let’s hope that these reports are greatly exaggerated.