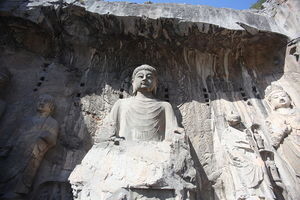 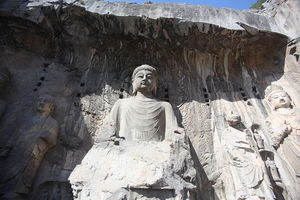 While the cliff sides facing China’s Yi River known as the Longmen Grottoes look as though they may be home to an oversized ant colony, in truth each and every pit in the rock is a Buddhist man-made shrine.

Originating mostly from the Tang Dynasty dating back nearly to 500 CE, the creation of the grottoes was started thanks to an emperor’s expansion of his empire. Wanting to create a new monumental work for the ages a large temple was carved directly out of the limestone cliff face featuring a group of large Buddha figures. Slowly, the temple began expanding with artisans building not further into the rock face, but rather creating small new niches adjacent to the central temple.

Over the next 500 years, over a thousand new spaces were dug out of the rock, each acting as its own little temple. Nearly 100,000 statues were created in the ever-expanding series of little caves. Generals, wealthy nobles, and other powerful figures from the time would commission new niches regularly.

Unfortunately many of the grottoes were looted and vandalized in the ensuing centuries, however the thousands of niches still exist on either side of the river. The central grotto still features a number of tall Buddha statues and is now a fenced off attraction and a protected UNESCO site.