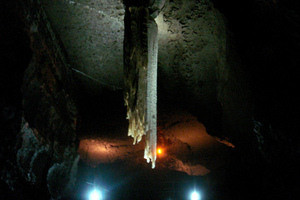 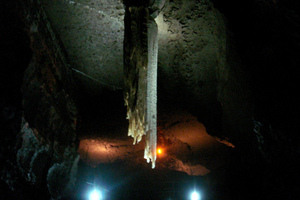 While Doolin, Ireland’s beautiful Doolin Cave may have had a controversial beginning as a popular attraction but after making it available to the public, thousands of people a year flock to this tiny town to take catch a glimpse of the Great Stalactite.

Originally known as “Pol an Ionain” the craggy limestone cave has been known to spelunkers for decades. However it was not until the 1990s that the subterranean treasure was made accessible to the public. Despite objections from caving enthusiasts, the tight and treacherous entrance to the cave was expanded and a door was placed over the aperture. The interior of the cave was also built out to allow for lay visitors. However after opponents of the plan took the cave owners to court and it was decided that no visitors center could be built on the land to keep traffic a bit lower.

All turmoil aside the cave was eventually opened, introducing the world to the Great Stalactite, one of the biggest free-hanging formations of its kind in the world. The giant ceiling spike reaches down almost 20 feet from the cave’s roof, an impressive creation considering it was created by simple dripping water.

The cave grounds also feature a peaceful nature walk through the lush Irish landscape, even though it is what lies beneath that is the true wonder.