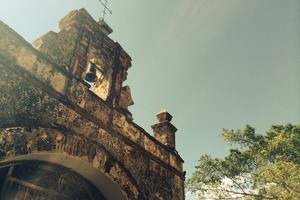 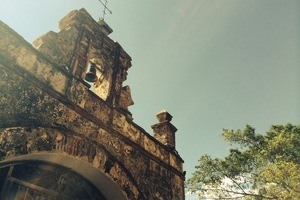 Tucked away in the corner of the old walled city of San Juan is a tiny chapel, one of the most beautiful and secluded monuments in the old capital. It was built on top of the ancient stone walls that protected the capital of Puerto Rico in 1753 to celebrate a miracle. Ever since then, tens of thousands of faithful Puerto Ricans have come to this humble chapel to pray for miracle cures themselves.

The story goes that during the San Juan Bautista celebrations of 1753, a rider in the traditional horse race, Baltazar Montanez lost control of his horse, plunging to the cliffs below. Watching the drama unfold from a nearby balcony was the Spanish Secretary of Government, Don Mateo Pratts. He is understood to have cried out, “Christ of Good Health, save him!” The horse didn’t survive the fall, but the young rider was miraculously saved.

That same year Montanez built the small chapel on the exact spot where he fell over the cliff face. The altar was built in shining silver and gold leaf, surrounded by beautiful oil paintings by the famous Puerto Rican artist Jose Campeche. Much of the modest sized, but immaculately well appointed chapel hasn’t changed since Montanez built it. But it has been slowly added to over the decades, by believers who come to the chapel seeking miracles for physical illness. Over the years they have brought tiny silver ornaments, each one representing some ailing part of the body. These small “milagros” decorate the walls, miniature silver legs, arms, hearts or lungs representing a much larger cause of pain for the pilgrim.

Today the church is only open on Tuesdays and religious days and is reverentially taken care of by a group of local elderly ladies; volunteers called “La Hermandad del Santo Cristo de la Salud.” Viejo San Juan is filled with countless hidden treasures within its ancient stone walls, none more so than in the southwestern corner, where an unassuming chapel offers hope to its visitors as it has done for over 250 years.