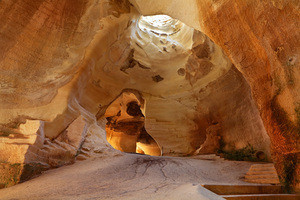 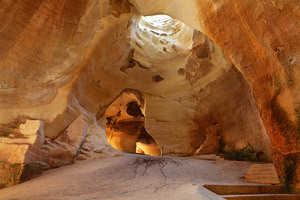 Dug out from beneath an area that was once known as the Israeli cities of Maresha and Beit Guvrin, the network of caves, named after the latter city, seem to have been created for a number of different reasons down the ages but stand today to wow Jewish pilgrims traveling to the homeland.

Maresha was the first city to stand on the site, dating back to Israeli prehistory, however it was eventually sacked and replaced by Beit Guvrin. This new city thrived in the area until it too was conquered by the Romans, leaving behind little but ruins and the caves.

The soft chalk earth of the Judean Lowlands made the construction of the thousands of caves possible even using nothing but the primitive technology of the time. Archeologists have discovered chambers dating from many of the eras of the area including Sidonian, Israelite, and Roman. Some of the caves appear to have been created to serves as defenses and hideouts, while others still look to have been made simply by chalk mining. Perhaps the most impressive portion of the over 3,000 chamber network are the painted burial rooms created by the Sidonians. These subterranean hollows are painted in bright, vibrant colors that have managed to maintain much of their character over the centuries thanks in large part by their protection from the elements.

Above ground ruins of the city of Maresha as well as a Roman amphitheater can also be found, but it is what lies underground that’s really worth the pilgrimage.